Markku Peltonen: The republican moment of the English revolution 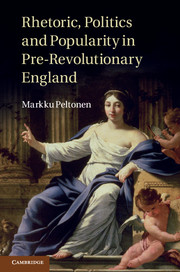 Markku Peltonen is Professor of General History at the University of Helsinki, and an expert in the political culture of Elizabethan and early Stuart England. He has published books on the history republicanism before the English revolution (Classical humanism and republicanism in English political thought, 1570-1640, Cambridge, 1995), of duelling (The Duel in Early Modern England: Civility, Politeness and Honour, Cambridge, 2006) and most recently the role of humanist rhetoric in education and politics before the outbreak of the civil war (Rhetoric, politics, and popularity in pre-revolutionary England, Cambridge, 2013). His work has been a major contribution to post-revisionist scholarship on pre-revolutionary English politics, emphasising the importance of classical humanism and the existence of an adversarial style of politics predating the outbreak of civil war.

There is an opportunity to join the speaker for dinner at a local restaurant after the lecture. Those interested should contact SCEMS (using the general contact form) by 5pm on Wednesday 5 October.